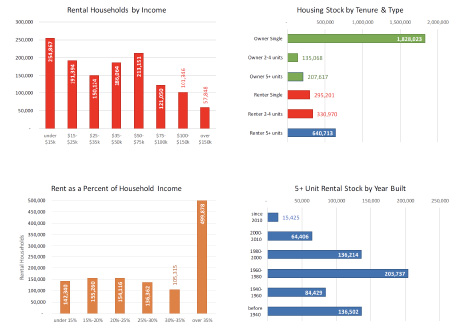 As a designated Counselor of Real Estate®, principal Michael Dinn is in constant association with the best real estate experts in the nation.  In the summer of 2017, Michael was contacted by fellow Counselor® Paige Mueller to team on a national apartment demand study for the National Multifamily Housing Council (NMHC) and the National Apartment Association (NAA). Distinguished real estate leaders Dr. Norm Miller and Dr. Jeff Fisher from the Homer Hoyt Institute joined in to win the award for a six-month study. The published outcomes were presented by Mueller to the Urban Institute in Washington, DC and by Dinn to the NAA Government Affairs council in Chicago.

Interestingly, the team found a disconnect between multifamily (five or more units) counts in every State and 50 metro markets: government Census and institutional brokers brought similar rental counts while upgraded CoStar® data reflected counts that ranged from minor to significant increases. With further research, the team concluded that over 40% of all national multifamily units are found in smaller, older rental stock located in older, urban neighborhoods. Dubbed Second-Tier Affordable Rentals, or STAR units, this sector of our national and metro housing represents a basis for in-place affordable housing amid national housing shortages and the market forces that make affordable new housing nearly impossible. The team’s findings were published as "HAS U.S. Apartment Demand - a Forward Look (2017)" and can be found at this link:

The following year, our team was engaged by the NAA to further the research by examining the barriers to new multifamily development in key metro markets. Mueller created a detailed 10-minute online survey that would be sent to hundreds of civic planners and developers in three dozen metro markets. Their responses were organized into ten barrier categories and indexed against each other. The aim was to prototype an expert-response ranking of key cost and policy issues as a basis for housing affairs advocates and their metro/state leadership discussions. Several complex metros were examined further in a second survey. The team’s findings were published as "NAA HAS Barriers to Apartment Construction Index (2019)" and can be found at this link: